“The scariest part of the county budget is that we are enjoying a strong economy with nice revenue increases, and yet the county is still unable to make ends meet in these good times. If it’s bad now, what’s it going to look like when the economy goes over the bubble and revenues start shrinking?” 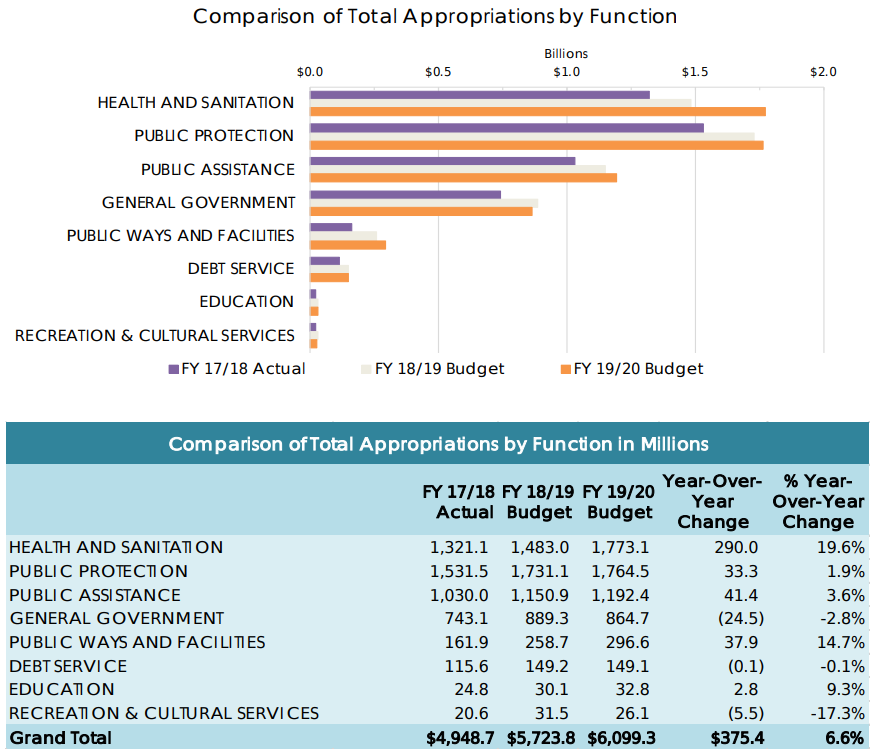 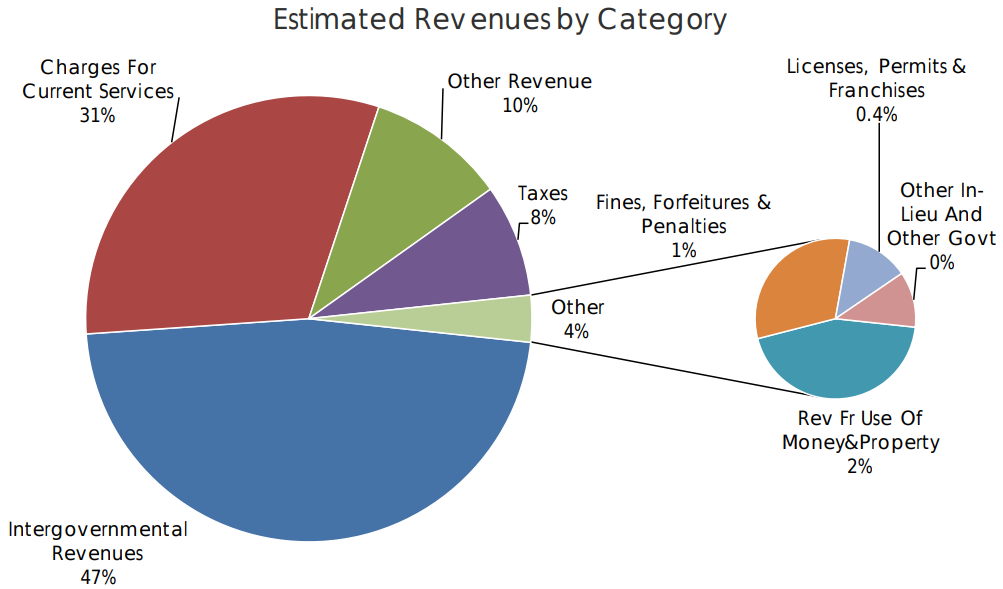 Riverside County looks to be continuing an ongoing strategy of budgeting but not spending about $200 million dollars a year and transferring the amount to the following year’s budget. Transfers from unspent contingency funds and reserves are not uncommon. The recurring transfers of unspent funds from General Government, Health and Sanitation, Public Protection and Public Assistance are more troubling, as those represent resources budgeted to provide services to people and went unused. Over the last three Comprehensive Annual Financial Reports (CAFR) these variances (the budgeted but unspent amount) were:

This money is rolled back into the next budget and not spent on housing, healthcare, mental health treatment, homelessness or many other services that the county’s residents need. The money that is spent on those programs is overwhelmingly state and federal funds. The 2017-18 CAFR states, “During the year, the General Fund had a positive budget variance of approximately $91.6 million resulting from unexpended appropriations of $272.2 million, or 8.5%, and overestimated revenue of $180.6 million, or 5.7%.” These transfers are repeated in the CAFRs going back many more years. The county overwhelmingly uses local county money in Public Protection. This is a recurring pattern.

The county rolls the money over year after year while asserting that there are no resources to address the chronic issues driving people further into poverty. Housing costs and health care costs are pushing more Riverside county residents into poverty each year.

Like all California counties, Riverside county has not developed enough housing. The 2019 Point In Time count found 2,811 homeless people. There were 387 in emergency shelter beds reported,  county wide. The county’s definition of homeless excludes the vast majority of homeless people from receiving any county services. The classification and surveying to ‘prioritize’ those ‘most in need’ are expensive and serving as a barrier to services. The county's failure to address the crisis five years ago, when they could have defined the homeless as a “vulnerable population” in their MediCal Waiver 2020 Whole Person Care Pilot went instead to the Department of Probation. They restricted the “vulnerable population” to people on probation. The The Whole Person Care Pilots allow MediCal resources to be used for housing. The state’s new budget includes another one-time $100 million General Fund for county pilots that coordinate health, behavioral health, and social services focused on individuals who are experiencing homelessness, or who are at risk of becoming homeless, and have a demonstrated medical need for housing and/or supportive services. The state budget includes one-time $20 million General Fund for counties that currently do not operate pilots. The pilots that were successful in other counties where they included homeless people in their definition and that success is reflected in the structure of the new round of Whole Person Care funding. The county, again, could have saved a lot of money in the county’s medical system by investing in a broader population five years ago.

The new state budget has funding for housing but it will take investment from the county to draw down these resources. Local Government Planning Support Grants Program allocates $250 million in planning grants to support local governments and regions in meeting housing goals. There is the Moderate-Income Housing Production that allocates $500 million to CalHFA to develop new low and moderate income housing. This loan program expands on the Mixed Income Loan Program funded through ongoing SB 2 revenues (California State Department of Business, Consumer Services, Housing). The state is also allocating $1.3 billion in one-time funds to spur low- and moderate-income housing development via local government grants and developer loans. The plan includes $500 million for local governments to build emergency shelters, navigation centers, and supportive housing for the homeless. There is also an increase in the CalWORKs temporary homeless assistance.

Many of the county’s Social Services will be getting more state funding in the new state budget. CalWORKs Stage One Child Care includes $56.4 million for 2019-20 and $70.5 million ongoing. This will support child care services for people transitioning from CalWORKs to a job. The state has also passed a $331.5 million CalWORKs Maximum Aid Payment (MAP) Increase and increases the Earned Income Threshold and Asset Tests. There is also a $441.8 million ongoing increase for Temporary Assistance for Needy Families (TANF). It would be advisable, if the county wants more resources to address issues of poverty in Riverside county, to invest county resources to draw down more of the state’s record surplus. The practice of “a conservative approach in budgeting for the highest potential expenditures in the Human Services Department’s budget across many social services programs” (Riverside County 2017-18 CAFR) will roll over more for future budgets but also cost the county a larger share of the state funding and the added costs associated with poverty.

In FY 17/18, the discontinuance of the State Coordinated Care Initiative (CCI) resulted in an increase in the related IHSS Maintenance of Effort (MOE) share of cost. The increase for Riverside of $86.1 million was partially offset from revenue sources provided by the state, including state general funds, redirected realignment revenue, and accelerated realignment caseload growth. This ultimately results in an increase of $400,000 in net county cost for FY 19/20. The state’s 2019-20 budget is increasing the County IHSS Maintenance-of-Effort and extends the commitment to 2023. The state budget also includes $357.6 million General Fund to restore the 7-percent reduction to IHSS service hours and includes an increase of $296.8 million General Fund in 2019-20 to rebench the County IHSS MOE, growing to $615.3 million General Fund in 2022-23.

The state budget also includes $260 million to expand Medi-Cal coverage to eligible young adults ages 19–25 regardless of immigration status. This will support the county’s medical system by reimbursing services that have fallen to other charity care resources. Their is also $65 million ongoing support for that provide an array of legal services and remedies related to immigration status for individuals and families. The state budget allows for up to $5 million to be available for the provision of legal services to unaccompanied undocumented minors and Temporary Protected Status beneficiaries, and $7 million will be used to support persons on California State University campuses. Additionally, the Budget includes $25 million one-time General Fund for the Rapid Response Program to support entities that provide critical assistance/services to immigrants. Much of these funds are tied to the county (or cities) committing local resources. Given the large number of immigrants in our county, it would be wise for the county to invest resources to draw down these funds to support the expansion of these services.

Those living on SSI or those who may qualify (homeless people living with mental illnesses) could also benefit from more state resources as well. The Supplemental Security Income (SSI) Cash-Out Policy Reversal is funding for county administration and benefits for newly eligible CalFresh recipients, Supplemental Nutrition Benefit program recipients, Transitional Nutrition Benefit program recipients, and California Assistance Program for Immigrants program recipients as a result of expanding CalFresh eligibility to SSI recipients. The Budget includes $120 million and approximately $115 million annually thereafter to fund these programs on an ongoing basis.  Riverside county would have many more people living with mental and physical disabilities positioned to receive the increased state and federal monies had they invested county resources in the Housing and Disability Advocacy Program three years ago.

California partnership applauds the state’s shift of juvenile justice out of the adult corrections bureaucracy and into the Department of Social Services (The Department of Youth and Community Restoration). The State of California has undertaken numerous corrections reforms in the past decade, including public safety realignment in 2011 and Proposition 47, in hopes of reducing the prison population, maintaining public safety, and improving persistently high recidivism rates. This makes the  increase in the Department of Corrections budget baffling. The Department of Corrections predicts the adult institution population will decrease 1.3 percent (1,627 inmates) from the 129,417 inmates on June 30, 2018. The further projection to 2023, of a decreased population of 6,571 fewer inmates, raises the expectation of a decrease in the Corrections budget. The state’s Corrections budget of $15.9 billion dollars is embarrassingly close to the $18.5 billion the state is spending on higher education. Many of our partners and allies have worked many years in reducing the population of prisoners in hopes that the savings would go to reentry and restorative services that further reduce recidivism. Housing and education are the primary drivers of a reduction in recidivism. California Partnership urges Governor Gavin Newsom and the state’s legislators to end the unconstitutional money bail system in California that leaves tens of thousands of people languishing in jails each year before they are convicted of any crime and simply because they cannot afford to buy their way out of jail. Punishment of people for being poor must end. We urge them to provide social services, healthcare (including mental health), emergency housing, bridge housing, and permanent supportive housing for California's homeless. Policing homeless people has failed to end homelessness. With the government reports of historic lows in unemployment and record highs in the stock market, California’s lawmakers need to make further investments in California’s health and human services to strengthen our safety net. 20% of Californians continue to be pushed into poverty by the high costs of housing and health care.